The junior sector had a very difficult year in 2011 but has led the recent recovery (at least statistically) in the precious metals sector. Two of our favorite exchange traded funds, GDXJ (NYSEARCA:GDXJ) and ZJG.to are up 30% and 25% respectively. That exceeds GDX (large caps) which has rebounded 15%. These are significant gains but barely put a dent in the low valuations for the sector. Ratio analysis shows us how undervalued the smaller gold stocks are yet an examination of history shows this is not out of the ordinary at this point in a bull market.

First lets take a technical look at the juniors. We show ZJG.to and GDXJ in the chart below. ZJG.to is a Canadian junior ETF which is comprised of entirely gold companies while three of the top ten companies in GDXJ are silver companies. ZJG is nearing resistance at 20-21 while GDXJ is nearing resistance at 31-33. More importantly, both markets have broken out of their downtrends against Gold (NYSEARCA:GLD). 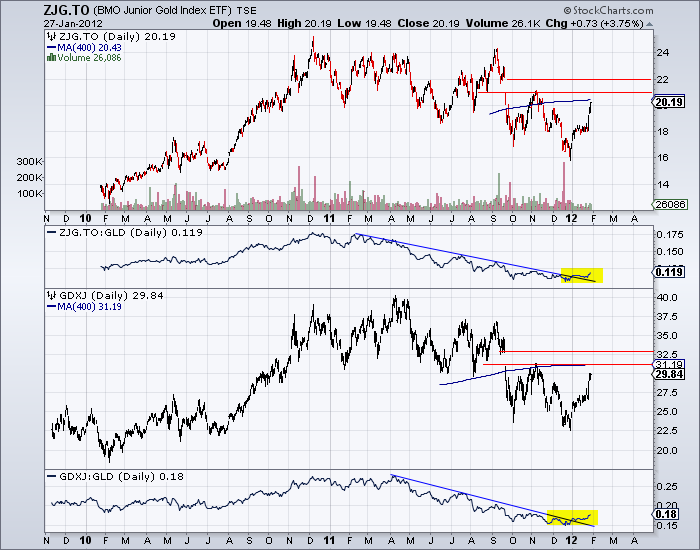 Next we show a plot of our junior gold index (call it JGI), GLD (NYSEARCA:GLD) and a ratio of JGI against GLD (NYSEARCA:GLD). Note that the ratio, which peaked at 0.7 in 2007, is currently at 0.4. JGI is presently at 66. Should Gold eventually break to new highs and JGI/GLD rise back to 0.7, then junior gold stocks would gain more than 100%. With large producers reporting record cash flow and profits, it is only a matter of time before all gold equities reach higher valuations against Gold itself. 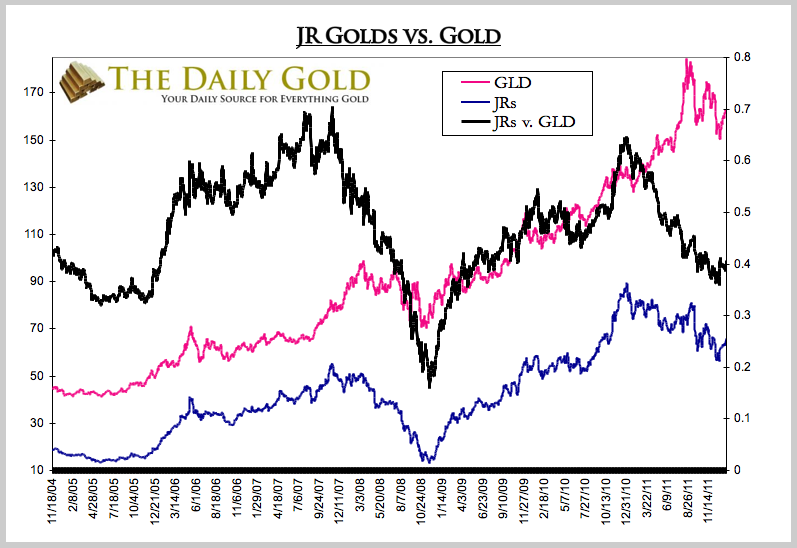 Our Junior Gold index as well as the other junior indices do not include the “true junior” companies which are of the microcap variety. The CDNX is basically an index for these types of companies. Most but not all of the companies within the CDNX are gold and silver related. Thus, in the chart below we decided to compare the CDNX to the CCI (continuous commodity index). The CCI is somewhat close to an all-time high while the ratio of the junior companies to the CCI is close to multi-year lows. With commodities not far off all time highs, one would expect the junior companies to be trading at higher levels. 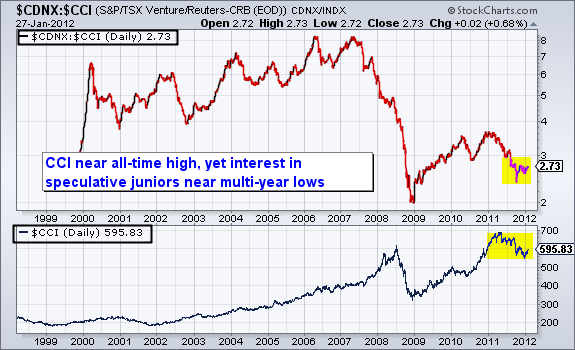 Lately we’ve been writing about how gold stocks are faring in comparison to previous equity bull markets. The comparison argues that gold stocks should fare well this year and well into 2013. Even though this bull market is in its 12th year, it remains a few years away from the start of a bubble. In a bubble, valuations expand far beyond fundamentals and it continues for several years. In order for this to happen, valuations must be low prior to the start of the bubble.

It is clear that prior to a market bubble, valuations are compelling. Not stretched or fair, but compelling. After all, a bubble needs time to develop and then have its final blowoff stage. Prior to the start, valuations begin to move from the low side to the high side. Then as the bubble really gets going valuations break to new records and surge to extremes.

Months ago we wrote about how the PE for large cap gold stocks was near a 10 year low. Now we see that the speculative side of the precious metals sector, (the juniors), is trading at near basement valuations. This is 12 years into a bull market. Not five or eight. It will take time for valuations of precious metals companies to move back to the high end of the range. Companies that grow their business and add value could perform fantastically thanks to a likely increase in the valuation of the sector.

Featured Reading: Is 2012 the Year of the Golden Dragon?

To contact the reporter on this story: Wall St. Cheat Sheet Staff at staff.writers@wallstcheatsheet.com

To contact the editor responsible for this story: Damien Hoffman at editors@wallstcheatsheet.com