Given current trends, with an eye toward historical patterns, the economy likely will keep growing into 2016 – and the stock market with it. After that, look for much less robust results. Why? For one thing, the tailwinds of loose monetary policy will no longer be at our back.

The U.S. economic recovery recently turned five. While much progress has occurred, significant economic slack endures. The U.S. has added only 500,000 additional workers since the end of 2007. Real wages have barely budged. Inflation-adjusted retail sales are just 3 percent above 2007 levels. Auto sales, while rising, have not fully recovered. And housing starts must rise more than 50 percent to match the 50-year average.

But based on historically reliable metrics, the economic expansion should last for at least another year or two. The Federal Reserve will complete its bond-buying stimulus program, called quantitative easing , in a few months but will hold interest rates low for a considerable time. That will encourage further growth in housing, autos, employment, and consumer spending. And even when the Fed does start to raise rates, the first several increases should have little, if any, negative economic impact.

While the economy has struggled to post meaningful gains since 2007, after-tax corporate profits are up more than 50 percent. The rise in profits is the driving force behind the broad-based equity advance. U.S. after-tax corporate profits eclipsed $1.7 trillion in 2013, a figure representing over 10 percent of the nation’s gross domestic product and the highest net profit margin in the country’s history.

High profit margins have important implications for valuation and future expected returns. Why? Jeremy Grantham, co-founder of Boston-based asset manager GMO, put it best, “Profit margins are probably the most mean-reverting series in finance.” Mean reversion, or regression toward the average, is the concept that if a data point is currently at an extreme level, it will tend to move closer to its average on future measurements. Historically, economy-wide net profit margins average 6 percent.

In analyzing net profit margins, it helps to separate the figure into three parts: after-tax corporate profits is equal to (operating profits less net interest) times (1 minus tax rate). That is, $1.742 trillion = ($2.662 trillion – $0.489 trillion) * (1 – 19.8 percent). The benefit of this separation becomes obvious when the data is presented graphically. 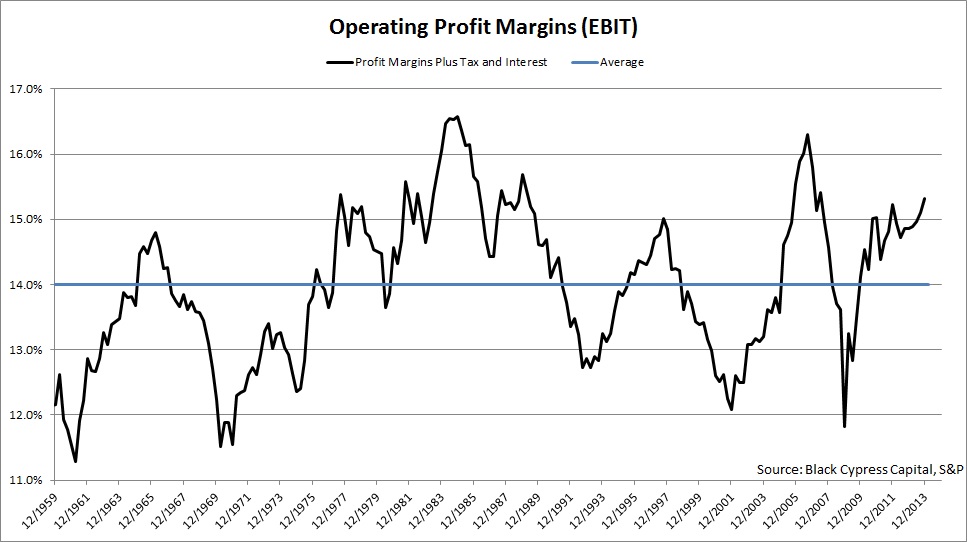 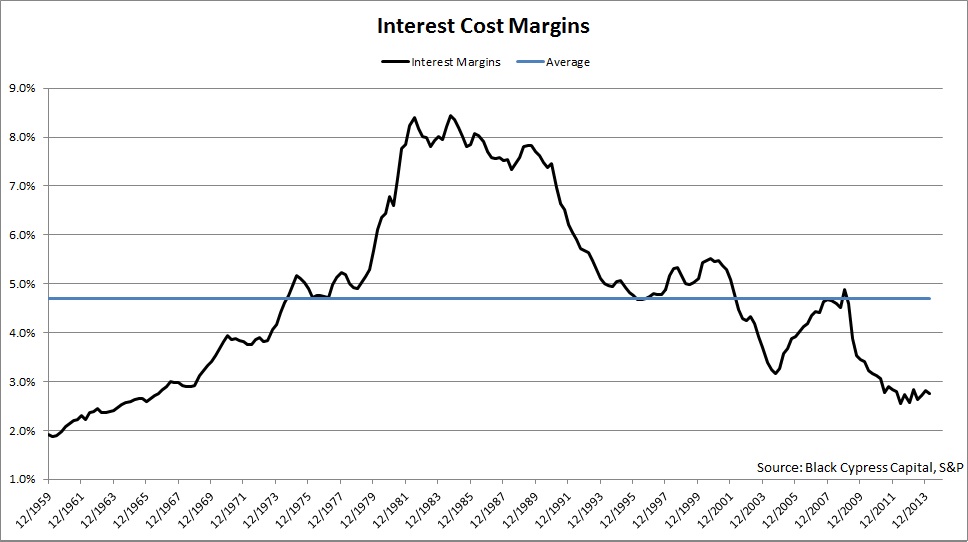 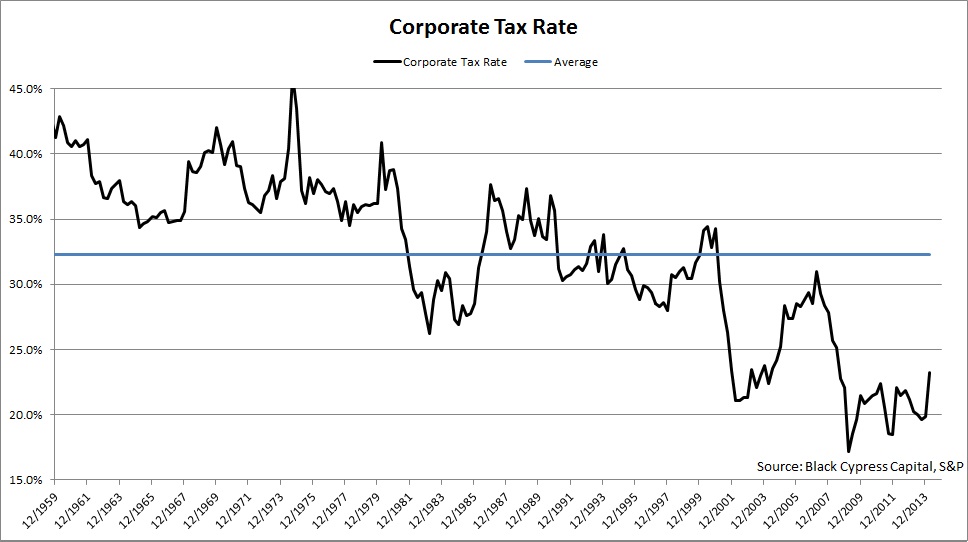 Over the last 50 years, operating profit margins had multi-year swings based on the profit cycle (which generally coincides with the business cycle), orbiting around an average 13.7 percent margin. During improving economic conditions, operating profit margins increased above this level. During recessions, margins decline below it. But note that there is no mean reversion for interest costs and tax rates. The former has fallen for 30 years while the latter has declined for over 50. years.

Operating profit margins are the only part of the equation subject to competition- and business cycle-induced mean reversion. Secular economic trends, on the other hand, impact interest costs and tax rates. They must be forecasted apart from mean reversion.

Failing to properly separate after-tax profits into its mean-reverting and non-mean-reverting parts could lead one to conclude that profits are currently overstated by 70 percent ($17.4 trillion GDP * 6.0 percent historical net profit margin) and set to immediately plunge, instead of concluding that net profits are elevated on the order of 15 percent (($17.4 trillion GDP * 13.7 percent historical EBIT margin) – current net interest) * (1- current tax rate), due to slightly-above-average operating margins with the longer-term risk of interest rate headwinds. With that knowledge now in mind, we can segue into addressing the valuation and future expected returns of the Standard & Poor’s 500.

The index is currently hovering near all-time highs. Analysts expect it to earn $104 on sales of $1,144 (both figures per share) for the 12 months ended June 30. Interest costs are expected to be $18 per share and taxes should approximate $42 per share. S&P 500 operating profit per share is therefore $164 ($104 + $42 + $18). Operating margins are currently 14.3 percent while they averaged 13.1 percent since the early 1990s (as far back as the data goes). This is fairly consistent with our economy-wide figures above.

Logically, the operating margin is the only inherently mean reverting series in the profit equation. It is this figure that makes sense to forecast returning to the average over the next five to 10 years. We must make separate estimates for future interest costs and tax rates.

Interest costs are likely to rise as the Fed normalizes policy over the next several years. Because 80 percent of nonfinancial corporate debt is long-term, the increase in interest rates will have greater impact on costs as time progresses. Forecasting taxes is more problematic. Both political parties in the U.S. are discussing lowering corporate tax rates. Even if tax reform occurs, loophole concessions might muddle the effect of the lower corporate rates. Logic favors modeling flat tax rates over the next decade.

The table above should make it abundantly clear how dire the return situation is for index investors. If the current high margin, low interest cost, above-average price/earnings ratio situation remains in place for seven years, equities would return less than 6 percent per year. (The S&P 500’s P/E now is 18.8, which is above the long-term average of 15.5.) The average public pension program assumes 8 percent annual returns. Not even a portfolio fully invested in an S&P 500 index fund under this rosy scenario is priced for 8 percent annual returns, let alone the average diversified pension portfolio containing 40 percent of fixed-income securities.

That isn’t to say that the short to medium-term forecast is as dismal. And here is where the value of separating after-tax profit into higher order parts becomes so useful. Net profit margins are likely to decline toward their average over the next decade. But if and when they do, most of the move will be due to the effects of rising interest rates and not as the result of some underlying, unadulterated mean reversion, as if margins have to decline to a long-term average, “just because,” without some relevant economic underpinning.

As stated above, we expect the economy to expand for another year or two and corporate profits with it. This will more than likely lift stock prices further. But while investors would benefit from the additional gains in the interim, long-term expected returns would only suffer further. For instance, if the S&P 500 rises another 25 percent, stocks would then be priced to lose money every year, on average, for the seven years that follow.

Unless we’ve entered a new paradigm of permanently low interest rates, high and stable profit margins, and peak multiples of earnings, the prospect of stocks delivering annual returns meaningfully above inflation is, to risk looking as foolish as the kidnappers’ egocentric ringleader Vizzini from the Princess Bride film, saying “inconceivable” and being wrong about that. Perhaps the third time is the charm. Math and logic argue otherwise.

Written by Alan Hartley, CFA. Alan Hartley is chief investment officer for Black Cypress Capital Management, which has offices in St. Augustine, Fla., and Charleston, S.C. He has been in the investment field since 2004.

AdviceIQ delivers quality personal finance articles by both financial advisors and AdviceIQ editors. It ranks advisors in your area by specialty, including small businesses, doctors and clients of modest means, for example. Those with the biggest number of clients in a given specialty rank the highest. AdviceIQ also vets ranked advisors so only those with pristine regulatory histories can participate. AdviceIQ was launched Jan. 9, 2012, by veteran Wall Street executives, editors and technologists. Right now, investors may see many advisor rankings, although in some areas only a few are ranked. Check back often as thousands of advisors are undergoing AdviceIQ screening. New advisors appear in rankings daily.